Drooling over the Lion King and want to experience some live entertainment? The Walt Disney World Resort is probably one of the places you should be looking at. Owned by Disney Parks, the resort houses several theme parks which are a beehive of activities every year; little wonder the ticket price keeps going up on a yearly basis. While the resort was constructed in the 1960s, it wasn’t opened for business until October 1st, 1971. This was largely due to the unfortunate demise of Walt Disney which disorganized the initial plans the company had for the resort. Disney wanted something real, certainly nothing like a mermaid as Caroline Barnum suggested to her father (from The Greatest Showman, another Walt Disney Studio production), but a live-in community of performers that visitors could appreciate. While the Walt Disney World Resort, situated in Florida, wasn’t the first attempt by the entertainment giant to bring entertainment closer to the people, it was expected to be different. Unfortunately, the four theme parks – Magic Kingdom, Animal Kingdom, Epcot, and Disney’s Hollywood Studios ended up being a replication of Disneyland in California – a clear case of how ideas get abandoned in the absence of its creative force. Considered one of the most patronized resorts in the world (more than 50 million visits annually), the Walt Disney World Resort has several attractions that could account for these huge numbers. Besides the four theme parks, the resort has two water parks, twenty-seven theme hotels, golf courses, a shopping center and more. Surprised? You shouldn’t be. The resort is spread across more than 24, 000 acres of land and more structures keep springing up on the land which still has a lot of unoccupied space. 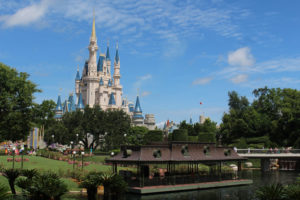 Getting to the theme parks from your hotel is pretty easy with Uber or a Taxi, I prefer Uber. The first theme park in the resort is the Magic Kingdom. Lacking the creative force of its founder, Walt Disney, the company stayed the course of its already established parks in Disneyland, California. The Magic Kingdom revolves around fairytales as signified by its magnificent Cinderella castle. With the slogan – the most magical place on earth – and the growing viewership of the Disney fairy tale animations, millions of people stopover at the resort to visit the Magic Kingdom to see things for themselves. There are 5 theme lands in the Magic Kingdom including Main Street USA, Adventureland, Frontierland, Liberty Square, Fantasyland, and Tomorrowland. Each of these ‘lands’ has their distinct features, and this has attracted people of all ages to the park.

Epcot is another theme park in the resort. Designated with a Spaceship Earth at its entrance, Epcot is dedicated to showcasing technological advancement as a form of entertainment. The park takes a larger expanse of land compared to the Magic Kingdom. Disney had wanted to build a utopian city hence the acronym EPCOT which stands for Experimental Prototype Community of Tomorrow. But the idea was jettisoned on the passing of the Walt Disney.     Disney’s Hollywood Studio park is believed to be where the magic happens. It comprises of amazing locations, studio-like performances, and an environment where kids can learn more about the arts and how their favorite movies are created. One thing sticks out regarding the park – its continuous demolition of previous theme structures in preparation for new ones.   Due to Walt Disney’s strong belief regarding the conservation of the environment and animals, the Animal Kingdom was established. It is considered the largest theme park in the resort with a whopping 580 acres of land. The park, which is styled similar to the African Savanna, is dedicated to educating visitors about animals and plants while protecting the interests of the animals.
Posted In Travel